i was recently asked to curate a mixtape of “classical” music for new york public radio. i looked around at my cd’s and records and put together a list of tracks which can be streamed on the WQXR website.

a few weeks ago clint mansell asked me to join him on stage in los angeles, in a kind of strange way . . . he asked me to film myself singing the song, and then apparently they put this slightly spooky character together for the stage and played along to my televised performance. i didn’t get to hear it, but i like the idea! 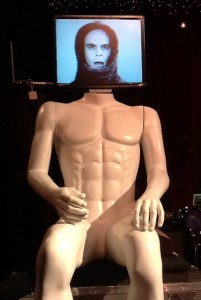