i have been planning my first trip to japan since late 2009. finally at the beginning of this year things came together and i had a string of shows booked for april. on the night of march 10, while on tour, i bought my plane ticket. the next day when we stopped off for gas, i saw the horrible news. i walked into the little store with televisions in each corner, showing flashes of massive flames and floods. at the time i had also just finished scoring a documentary film about the aftermath of the 2010 earthquake in haiti . . . my gut and my heart sunk very low that day. how little control we have…

in the weeks following this disaster, i met and talked to so many musicians who wanted to find a way to help. and now, two months later, i have been invited to participate in four different benefit albums from which all proceeds will go directly to japan. two of these records are available now. you can have a listen to my tracks here, and please do check out the whole compilations if you have the time. my trip to japan has been postponed until september . . . i look forward to then. 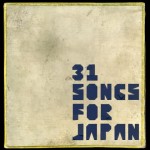 p.s. i also updated the musics page with mp3’s for streaming from most of my releases 🙂

4 thoughts on “music for japan”